The yin and the yang of expat life in Korea

UPDATE: It’s been nearly a week since I wrote the following entry, but I didn’t have a chance to post it. This week I got a phone, am moving to a new apartment in town, and had another showdown about the intolerable third grade class situation. My new apartment comes with Internet so it will be much easier to keep you up to date.
Thanks for reading!

Last week saw the beginning of a new chapter in the riveting English class curriculum, with promising titles such as: “How Many Cows?,” “Is This Your Cap?,” (which I have already edited to read “Is This Your Crap?”), “Do You Want Some More?”, and “I’m Stronger Than You.”
Most of the foreign teachers agree these lessons are complete crap, and no way to learn English. Some teachers have even told their Korean co-teachers that they will not use the book, and are designing their own lessons, but I’m not sure that’s the wisest course. It’s a flimsy foundation, but it is what their entire English curriculum through grade 12 is based on. Besides, that sounds like a lot of work.
Also, I really don’t feel like the students are going to learn English by mass yelling and game playing sessions, no matter how you serve it. I have to clear my desk of sharp instruments before each class so that I don’t poke my eyes out with frustration or jam markers in my ears to block out the horrible, horrible song lyrics. I can’t help thinking, I am an award-winning journalist…what the hell am I doing here?
Then I remember, oh right, bills, bills, bills. Money is not the most altruistic reason for teaching overseas, but it is a driving force and a major reason many people choose Korea. I believe it’s the only country that does not require a TESL certificate. But I think I’ve already said that. Sorry.
We did finally get paid this week, which helped considerably to ease my anxieties about this decision. I also keep telling myself teaching is a means to an end: gaining the experience of living in another country while earning the income to make it possible, and possibly doing some traveling to neighboring countries during school holidays.
As sure as death, taxes and screaming Korean children, the weekend always comes.

This weekend held a variety of diversions, thanks to my new-found foreign teacher friends. Friday night we attended an amazing concert of traditional Korean music, which was held on the water of an inlet. Yes, ON the water. The concert is an annual reenactment of a concert that was held for the king of the Joen dynasty.
The concert-goers (standing in for the royal court I guess) are seated on small concrete piers that jut out into the narrow inlet, and the performers are floated out on rafts into the middle of the inlet. A high, suspension foot bridge serves as a backdrop, complete with fluorescent neon lights, which I’m sure they would have loved for the original show, had they been available.
The weather turned much cooler on Friday and it finally felt like fall. As night fell a wind picked up on the water and the concert was actually chilly. One performer was a beautiful opera singer, and we all felt sorry for her as she bravely gripped the mast on the small raft as it bucked on the incoming waves. She must have been freezing in her sleeveless evening gown, but her voice was amazing. Oarsmen fore and aft did their best to control the craft, which was also tethered to the shore by a long rope. Basically, the man in front pulled the raft along the rope while the one in the stern provided thrust. Another performer wore a beautiful traditional silk dress, with bamboo painted in broad strokes on the cloud-like outer layer. She was seated on the raft and played a bamboo flute. I managed to take this shot of her clutching the raft as it lurched back to shore. She didn’t look too happy. 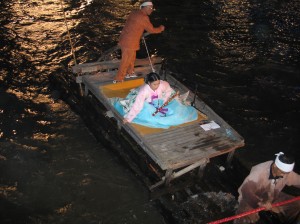 Like a lotus blossom on a calm pond...or not

Opposite us on the inlet wall was a full orchestra and a big screen TV, which was great for seeing what was going on when the rafts floated away from our view a bit.
The most dramatic moment came at the end when a male opera singer was riding the waves, so to speak, while the orchestra played dramatic music which seemed perfectly timed to the waves crashing against the raft. I thought it sounded like Wagner, and I was close – music major Karissa said it was another Germanic composer, Carl Orff. The composition was “Oh Fortuna,” from Carmina Burana if you want to look it up.
As the song reached its finale a hail of white fireworks rained down from the footbridge, lighting up the water and the sky. They probably did have those for the original performance.

The concert was the first time my fellow Foreign Language High School cellmates got to meet the teachers I have made friends with, through the Internet, who have been here more than six months. Since two of them have the luxury of owning cars, after the concert the seven of us went back to the City Hall area where we reconvened at a Korean restaurant that specializes in a drink called makali, which is a milky, alcoholic rice beverage served in a large pottery bowl. Individual portions are scooped out into smaller bowls with a wooden, hand-carved ladle. It was a fun evening and a great start to the weekend.

Saturday morning (well, noon-ish) Cindy, Karissa and I went in search of a fabled Belgian waffle brunch, back at City Hall. It was also the day of the first presidential debate, and while I was not able to find a TV with CNN at 10 a.m., when it would be live here, I was determined to watch it on a computer somewhere. We found the trifecta of waffles, coffee and free Internet at Ti-Amo, a newly opened “Italian” café. The waffles come served with two huge scoops of gelato, smothered in whipped cream and topped with a maraschino cherry. Yum! The café had a huge and mouthwatering assortment of gelato flavors – it was hard to pick just two! Karissa had pistachio and chocolate, Cindy had blueberry and tiramisu and I had pistachio and strawberry.

When Karissa got hers first, it came with three forks. While we waited for waffles number two and three to arrive, we realized that the waffle makers assumed that we would share one waffle, as that is probably what Koreans do. But no, greedy Americans that we are, we wanted our own INDIVIDUAL waffles. That’s the American way! We did share though, tasting each gelato flavor. They were all divine. So much for my plan of losing weight while I’m here. It would be easy to stop off on my way home for a gelato cone way too often. I was better off when all I knew about were fish soup and kimchi. (photo coming soon!)

We caught a few minutes of the debate video, before catching a bus up to the National University for a lecture on how to teach public speaking, sponsored by the Korean TOSEL organization (KoTESOL). It was not very productive, but once again we met up with our other teacher friends. Colleen, who is on her second year teaching here, loaned me a cell phone. Everyone here is cell phone obsessed and keeps saying, “you’ve got to get a cell phone!” But, getting a phone is another set of hurdles, requiring possession of an Alien Registration Card and having a Korean friend to go along to the store with you to make sure you don’t get screwed. Usually this is your Korean co-teacher, but mine have been pretty worthless about doing anything outside of school. Colleen and Sherrin said I could “borrow” their Korean friend.

Saturday concluded with more makali drinking with Colleen, plus blended kiwi and soju drinks at a Japanese restaurant, and a beer at Led Zepplin, a young expat bar, where I met up again with my FLHS mates. There is apparently no such thing as “closing time” in Korea. One girl said she knew a bar that stayed open until 6 a.m.!

I really am going to have to go back on the fish soup and kimchi diet after this weekend. Sunday Colleen drove me and three other folks down to Seogwipo (Soggy – poe), where we had lunch at an amazing Italian restaurant, or Korean-Italian I guess you could say. The setting was fabulous, with a big deck for al fresco dining with a view over the harbor. The weather was perfect, warm in the sun with a cool breeze in the shade.
I had “spaghetti del mare,” a pasta dish made with a very rich cream sauce and tons of clams and mussels. It was divine, and only about $13. 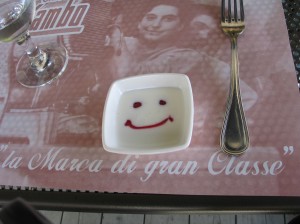 Served with a smile, Mokambo style.

We planned on going to the Jeju United soccer game that afternoon, but we lingered so long at the restaurant, reluctant to leave, that by the time we got to the stadium the game was half over. Oh well, it’s island time.

The game was held in the Jeju World Cup Stadium, a 42,000 seat stadium built to host the World Cup game in 2002. It was a beautiful stadium, but seemed small for such an important event as the World Cup, you know, what the rest of the world considers the Super Bowl, but with “football” instead of football.

All in all it was a great weekend, relaxing and rejuvenating at the same time. However, Monday is still Monday, even when it’s pronounced “wo-ryo-il.”

This entry was posted in Uncategorized and tagged jeju, waffles, world cup soccer. Bookmark the permalink.