Oddly, today’s sixth grade class started a chapter on giving and accepting invitations, with “Thanksgiving Day” as an example. I would have done a culture lesson, with requisite props (hand turkeys!) but we had to cram four hours worth of lessons into one hour because the class is behind schedule. Hmm, how could that have happened?

But the teacher asked me to talk about the uniquely American tradition, and the kids were really curious. So, with the smell of cow bone soup (really) drifting into the classroom from the cafeteria, and a cold, driving rain outside, I regaled them with tales of juicy roast turkey, freshly baked pumpkin pie and all the trimmings. I skipped the watching football part, because I don’t like football.

They were amazed to learn that students got two days off from school, and that we all went shopping the day after Thanksgiving. Kind of reinforced the stereotype of America, the land of excess, but oh well. That really is what Thanksgiving is all about, right? Oh yeah, and the giving thanks part.

So what is there to be thankful for this year? The U.S. is at the vortex of a worldwide downward spiral, with no bottom in sight. My earnings have dropped 40 percent since I get here just three months ago, again with no bottom in sight. If this continues, by next month I won’t be able to meet minimum payments on my credit cards, which I ran up just by trying to live in Seattle with no job, and will have to decide which credit card to default on. But that will cause all of them to go into default mode, and bankruptcy is just around the corner from there. Join the crowd. On the bright side, once that happens I will be able to start saving again, and perhaps rise from the ashes.

At this point maybe that’s what we can all be thankful for: second chances. This is not the apocalypse, but it is a time of great change; a time to take stock of what matters to us; what we need vs. what we want. What can we not live without, and what do we cling to and covet simply for material comfort?

Living in a foreign country forces you to confront this on a daily basis. Do I need real butter, even if it’s $10 pound? Yes. Do I need to own a car? I would like to, but no, it’s not essential. Do I need to eat kimchi every day? Most definitely no. Do I need to be around people who speak my language and share my culture? Yes.

This point was brought home last weekend when a group of us, eight English speakers and one Korean, visited a Buddhist hermitage on the snow-covered slopes of Mt. Halla. In the waning afternoon light we hiked half an hour over a snow-covered trail, and were rewarded by the tranquil view of the hermitage suddenly appearing through the trees. A small boy labored to roll a huge ball of wet snow, and the lone monk, dressed all in gray, nodded approvingly as he passed. The main temple and auxilliary building followed the standard temple template: ornate and huge multi-tiered “pagoda” style roof atop a building featuring large wood beams and latticework doors. The eaves were brightly painted in primary colors: red, green and blue, with yellow, orange, white and black accents. Dragon heads peeked from every corner.

Worshippers removed their shoes on the frozen stone entryway before slipping inside to bow before the golden Buddha. The smell of incense filled the air. Snow fell in plops from the steep tile roofs. Crows gathered in the bare trees surrounding the clearing. 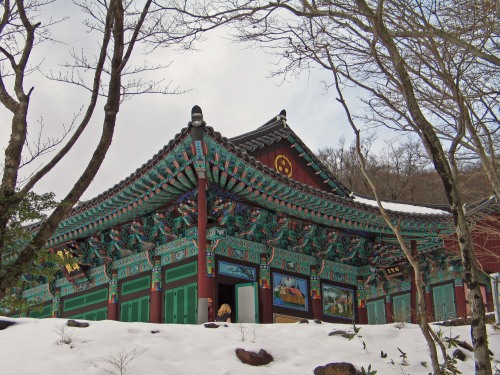 The monk in residence is in the middle of a three-year stay. Three years in which he will not leave the mountain, but spend his time meditating and moving along the path to enlightenment. Aside from a cook, he is alone. Well, and except for visitors.

On this day he was delighted to invite us all to partake in afternoon tea him. We all crowded around a low wooden table made from a single slab of wood, knees touching. It was chilly in the room, apparently there was a problem with the floor heating, but the simple monk was not without his creature comforts. The hot water for tea was at his fingertips, thanks to an electric water boiler. With the push of a button he poured steaming water over the tea leaves in a small pot. He explained that it was a special kind of black tea. (It actually tasted like mud.) After the leaves settled to the bottom he poured the tea into a small bowl with a lip. This is the traditional way of serving tea, as we had seen at the other temple a few weeks ago. He then poured the tea into small, handmade pottery cups.

He indicated that he wanted each of us to say our name, where we were from, and our age. He was 52 in Korean years, which is 50 in western counting. He was of course shocked when first K, then I gave our ages. He thought we looked much younger. Hey, would a monk lie?

As we talked and bonded over many cups of tea, he invited us to have dinner with him. We all looked nervously at the sky, thinking about the prospect of hiking down the slippery, snow-covered trail in the dark. Our Korean friend relayed our concerns to him, and he graciously moved up dinner time to accommodate us. We were grateful, as it would have been very bad manners to turn down his invitation.

Any preconception of Buddhist monks being solemn and taciturn was shattered at dinner when the monk happily plopped himself down next to, and almost on top of, one young man in our group, while giving him a hearty hug. J was taken aback, but was a good sport about it. Oddly, the monk did not actually dine with us, but hovered around the table making sure we were taken care of.

We felt a bit sorry for his cook, who didn’t know until 15 minutes before dinner that she would be serving not one but 10 meals! After a simple meal the monk loaded us up with organic tangerines (which they call oranges) and we headed down the trail. I was thankful that we made it out before dark.

Happy Thanksgiving, everyone. Eat a huge piece of pumpkin pie with real whipped cream for me.

This entry was posted in Uncategorized. Bookmark the permalink.

2 responses to “Holiday greeting from Jeju!”