One week later…
It’s been a busy week with little time for anything but catching the bus in the morning, being at school all day, riding the bus, actually two, home again, slurping down a bowl of noodles and reading myself to sleep.
So to back up:
I was not able to take a hot shower when I moved into my apartment Sunday morning, nor for several days, as again, the gas had been turned off when the tenant moved out, and not turned back on. I ended up taking a shower at K’s, but it’s just not the same as your own! These dorms/apartments are big by Korean standards, about 450 square feet, with full-sized bathtubs. Although the building is on the grounds of the Foreign Language High School the residents are all foreign teachers, only two of whom work at the school.
This week has been so crammed full of experiences it’s hard to know where to begin.

My social life
Yes, I do have one. Thanks to the Internet, before I even got the job I was able to hook into a message board expressly for foreigners living on Jeju, rhymeswithjeju on Yahoo. It offers a wealth of information, and I met several people on there that I have now met in person. There is even a subset of older foreign teachers that I have met and hope to do things with on a regular basis. Even though we come from disparate backgrounds and locales, teaching English in Korea gives us a unique commonality. One week and I already have more friends than after eight years in chilly Seattle! Plus I have K, the other teachers in this building, and random “waygooks” (foreigners) I’ve met on buses and in stores.
Last night I went to dinner with a group of women around my age, as one was celebrating her 47th birthday. I won’t name her here, but she is a local icon. She’s been here four years and knows every nook and cranny of Jeju, as well as how to get around culturally. One evening with her was worth a month of orientation. Her best advice: get a Korea friend to help navigate the bureaucracy, and learn to read Hangul, the Korean script. The language itself is very difficult to learn in its entirety, but I hope to learn enough to get around town. One of my new friends said Korean is supposed to be the most difficult language to learn, after Turkish. His take on that – Hey, it’s only the SECOND most difficult! Thanks, Tommy.

“Do you like kimchi?” This is another popular question, usually asked right after, “Do you like Korean food?” Um, sure, what’s not to like about chicken knuckles smothered in red pepper paste, stir fried, whole tiny fish, and limp, dead, pickled cold cabbage smothered in red pepper sauce, served with sticky white rice? That’s an actual menu from the school cafeteria. The staff at the big school has “generously” agreed to pay for my lunch every day, thereby obligating me to eat what is served. To refuse food or not eat it is insulting. Kimchi is not just a food, it’s a national source of pride. Foreigners politely say it’s an acquired taste.
Soju is another unique Korean item, but one I quickly became fond of. It’s a type of distilled rice (or sweet potato) liquor with about a 20 percent alcohol content. It’s clear like vodka, but the taste is very mild. It’s deceptively available in six packs, but drinking an entire bottle would be like drinking a six pack of beer. One bottle is about $1.50 and it’s available everywhere, including the convenience store on the way home from the bus stop. I can’t wait to experiment making “sojutinis.”

Here are a few photos of my apartment building from the road and the neighbor I see very morning weeding her patch. 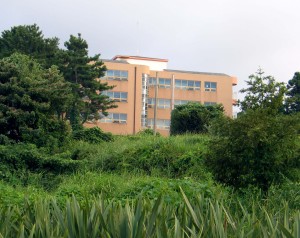 Welcome to the pen 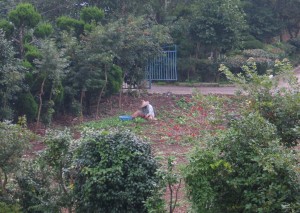 This small farm is directly across from my apartment.

I will post more photos soon, of my schools, the adorable students and the fascinating world that is my new home.