Fifteen minutes of fame on Gapado

If Jeju-do is an island in the middle of nowhere, then Gapado is an island slightly to the south of the middle of nowhere. A 20 minute boat ride south to be exact.
Colleen, who always knows what’s going on where, suggested Gapado was the place to be last weekend, with an island-wide festival featuring barley field walks, kite flying and “catching sea animals.” Count me in! Along with our friend Kim, we set off bright and early Saturday morning to catch the 9 a.m. ferry. Hellishly early for a Saturday, but what the heck, it was something different.
We drove to the southwest corner of the island, to the town of Moseulpo to catch the ferry. The terminal was packed with Jeju-ites headed to the small island, seemingly just a stone’s throw away. The sea was very choppy with a brisk head wind, making at least one passenger cling to the rail, with a greenish tinge under her white pancake makeup.
The ferry pulled in on the leeward side of the island, out of the wind, and we debarked via a set of steep steps notched into the concrete pier. No sissy handrail here. Gapado is maybe 20 acres total, with almost no trees and constant wind. The 200-some villagers have traditionally subsisted on fishing, but we were surprised to find that there were substantial fields of barley covering the gentle sloping stretches of land. The island offers spectacular views of Jeju, including the impressive dome-shaped San… and Mt. Halla. The Barley Festival marked the debut of a substantial push to increase tourism on the island, which in the past has catered almost exclusively to fishermen.

Father and son kite flying, with Sanbangsan looming in the background.

The new tourism effort was immediately seen in the wonderful, detailed murals painted on the walls of modest huts lining the main roads through town. There were murals depicting fishing, farming, and of course the hanyeo, the women divers for whom Jeju is famous. There is a community of these hardy women on Gapado. Just outside of town, there were brand new paved, stone wall-lined walking trails criss-crossing the barley fields and meeting up with a paved road that circumnavigates the entire island.

Over the course of a few hours we walked the entire island, despite the wind and cold, and the Korean paparazzi. Did I mention we were the ONLY foreigners on the island?
A highlight was watching a shaman and a kite master set aloft a string of what must have been a hundred small paper kites, all strung together. It was really beautiful to watch them undulating across the blue sky. What a great job to have!

The fellow in the spiky hat, left is a shaman. I don't know why he was flying kites.

It was at this point however, that we were literally mobbed with photographers, shouting at us to slow down, stand here, look this way, stop! It was funny, but weird. One of the photos, where we were told to wave our hand along the barley as we walked slowly, appeared in today’s local Jeju paper, and online. Not once did anyone ask for our names, but I’m sure their line was “foreigners happy dream of Gapado festival!” Who needs a name when you’ve got a stereotype?

Waygooks in the barley, as featured in local media. 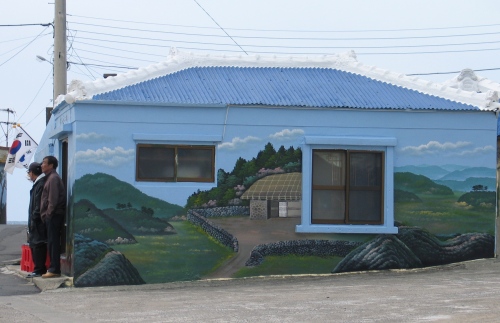 One of the many beautiful murals that enhance a visit to Gapado.

When we arrived at the main festival area, one photographer who had been particularly pushy insisted on buying us beers. He sat with us while, it seemed, making sure everyone saw he was squiring the foreigners. He even got us festival hats and made us pose for photos holding Korean flags, and introduced us to the mayor of Moseulpo. For the record, at one festival I linked arms and did soju shots with the mayor of Jeju, so I am not without friends in high places.

There was no shortage of seafood-serving restaurants on the island, but since Colleen is a vegetarian, and none of us read Korean well enough to order off a menu (pathetic, I know), we caught the 4 p.m. ferry back to the mainland, or what now felt like the mainland. I would recommend a trip to Gapado, but it would be nicer in warmer weather, and with a picnic lunch. It would also be very photogenic in the fall, when they harvest all that beautiful barley.

Life is good for toddlers on Gapado

This entry was posted in Day to day life, Uncategorized and tagged gapado, sanbangsan. Bookmark the permalink.

4 responses to “Fifteen minutes of fame on Gapado”