Zen and the art of blog maintenance

I wish I could blame my tardiness in blogging on a zen-like calm that has descended upon me in the past week, but no. I’m just lazy.
Speaking of zen though, last weekend my friend C treated several of us to a day at a Buddhist temple, located about half an hour east of Jeju-si in a small seaside village. She has a friend who is the unofficial cultural officer for the temple. Seems the chief monk wants to bring in more “foreigners” to check out what it’s all about. I had to suppress a childish giggle every time she said “chief monk,” because it sounded like “cheepmunk/chipmunk.” See, told you it was childish.

Anyway, we were privileged to get a chance to observe a special ceremony to honor the village’s ancestors. The site holds two temples, one an older, traditional one, and a more modern which is essentially two stories tall inside, but with the first floor below ground. Participants enter the temple via a ramp, while spectators enter at the ground level, ending up on a mezzanine that surrounds the temple. We were eye to eye with the huge and impressive gilded statue of Buddha. The Lord Buddha sat serenely (as always) in the lotus position while acolytes piled food on the alter in front of him.  The plumpest grapes,  roundest Asian pears and freshest rice cakes; only the best for Buddha. Explains the belly.

The village participants were all women, as were two of the monks. Our hostess explained that this temple was run by women monks. And they were called monks, not nuns. The lone, senior male monk was a special guest just for this occasion. The three monks took turns chanting from scriptures and keeping rhythm on drums, while the attendees bowed repeatedly. With the deep, droning chants and the steady drumming, it was quite hypnotic. Koreans practice a type of Buddism which is a close cousin to Zen, but that’s about all I can explain about it. The ceremony lasted about an hour, then we were invited to eat lunch with one of the young women monks.

I’m not sure about the protocol, but after we ate a quite delicious vegetarian meal, the rest of the attendees then entered the dining hall to take their lunch. Had they been waiting for us to eat first, and leave? It reminded me of my Chuseok experience, when only I ate with the elders, while the rest of the family apparently ate later. After lunch we retired to the “culture center,” a modest building with lava rock-covered outer walls. Inside we gathered in a circle on the floor (with no pillows – ouch) and the young monk joined us. She proceeded to brew up a special young green tea, which she then served in an elaborate tea ceremony. We talked for several hours, and she never stopped making tea. There were also piles of fresh fruit and boxes of rice sweets. They said it was common for monks to drink tea non-stop all day.

With her shaven head and loose grey garments, it was hard to tell her age. I would guess she was under 30. She was “on loan” from a temple in the mountains of the mainland. She invited us to join her there in the winter. While that sounds beautiful, something tells me it might be a little austere. With windows open for fresh air, the room was abuzz with mosquitoes. One of the visitors asked the monk if Buddhists killed mosquitoes, and she just sort of smiled. By the end or our visit I noticed her unprotected head had fed several fat mosquitoes. She didn’t swat at a single one.

I wish I could report that I quizzed her about Zen, Buddhism and the meaning of life, but I was woefully lax. Everything had to be said through the interpreter, and with four other English speakers vying for her attention, I faded into the background. Oh well, being a fly on the wall is not without its rewards. Oftentimes you can learn more by listening than by talking.  Did Buddha say that?

This was an experience where words don’t do it justice, so I will let these pictures tell the rest of the story. Enjoy.

You can get an idea of scale by the fruit on the altar. 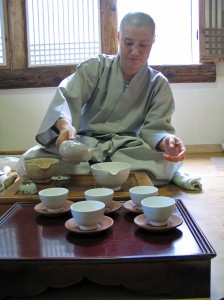 Our monk host, making the first of many pots of tea.

This entry was posted in Uncategorized. Bookmark the permalink.